In a tour de force of precision medicine, an international team led by two Columbia University Herbert Irving Comprehensive Cancer Center (HICCC) researchers has demonstrated the potential of a new approach to prostate cancer treatment. The iterative strategy, named OncoLoop, uses a sophisticated computer algorithm to match each patient to an “avatar” -- a carefully engineered laboratory model of a cancer that matches the molecular profile of the patient's tumor. By selecting drugs that target the master regulator proteins responsible for the genetic program driving the avatar’s tumor, the team can then validate the treatment regimen most likely to work in that patient.

“We take a patient, we match them to the set of mouse tumors we already have, and to the set of drug data that we already have, and then actually identify drugs that are most likely to work in both the patient and the model … test those drugs in those  models, and then use that information to inform clinical treatment,” says Cory Abate-Shen, PhD,  a senior author on the new work and member of the HICCC and department chair of Molecular Pharmacology and Therapeutics at Columbia University Vagelos College of Physicians and Surgeons (VP&S).

The premise of genomic medicine is that a person’s genomic characterization can be used to improve medical diagnosis, prognosis, and treatment. Each person, however, has millions of genetic variants, the vast majority of which have negligible impact on their health. How to determine which variants are relevant to a particular condition is a central issue in genomic medicine.

The issue is most pressing in the case of missense variants, which alter a single amino acid in proteins. Only about 20–30 percent of these mutations have a functional impact. Thus the question of how likely a variant is to change protein function—contributing to a health condition—is extremely uncertain for missense variants. As a result, most missense variants in clinical genetic testing are classified as VUS (variant of uncertain significance).

Yufeng Shen, PhD, an associate professor in the Department of Systems Biology and the Department of Biomedical Informatics, and his group have developed a new method for predicting which missense variants are potentially damaging. The method, called gMVP (graphical model for predicting Missense Variant Pathogenicity), uses one of the latest machine learning techniques, a graph attention model, to capture information relevant to predicting which variants are potentially damaging. Their paper, “Predicting Functional Effect of Missense Variants Using Graph Attention Neural Networks,” was published in Nature Machine Intelligence on November 15th, 2022.

Chaolin Zhang will receive a prestigious Maximizing Investigators' Research Award (MIRA) (R35) of $4,313,684 over five years from NIH/NIGMS for “Complexity and evolution of splicing-regulatory networks”. This grant will support studies in the Zhang lab at the intersection of alternative RNA splicing and evolution.

Andrea Califano will receive  $6,909,000 over seven years from the National Cancer Institute for “Predicting Cancer Cell Response to Endogenous and Exogenous Perturbations at the Single Cell Level”. The aims of the project are to create the first generation of genome-and proteome-wide network models that can effectively predict the probabilistic, dynamic response of mammalian cells to small molecule and genetic perturbations, as well as their ability to plastically reprogram  across the relatively small number of molecularly distinct states detected in a specific human malignancy.

Andrea Califano will receive  $4,893,902 over five years from the National Cancer Institute for “Elucidating and Targeting tumor dependencies and drug resistance determinants at the single cell level”. The aims of the project are to elucidate Master Regulators representing non-oncogene dependencies of molecularly distinct malignant subpopulations coexisting in the same tumor to support novel combination and sequential therapy approaches.

Corrine Abate-Shen, PhD, Molecular Pharmacology and Therapeutics: $486,000 from the Department of the Army, Army Medical Research and Material Command for “Role of ATAD2 in prostate cancer bone metastasis.” 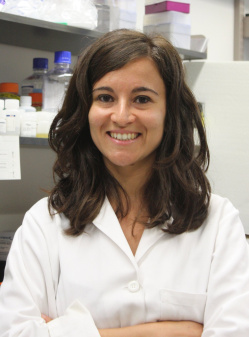 Dr. Zaccara grew up in a small town in Italy. She received her PhD from the University of Trento, in Trento, Italy, where her thesis work was on p53-dependent translational regulation. She received her bachelor’s and master’s degrees in biotechnology from the University of Florence. “I studied biotechnology,” she says, “because I was fascinated by the idea of developing new methods that could improve our future in medicine.”

Dr. Zaccara’s research focuses on the intricate cellular mechanisms that control the chemical tag called m6A, which cells insert into almost 30 percent of their mRNA molecules. She has proposed a unified model of how m6A mRNAs are controlled in cells. She also helped show why the number of m6A sites in mRNAs has functional consequences for mRNA fate.

Currently, Dr. Zaccara’s group is working on characterizing the mechanisms that trigger m6A mRNA degradation in normal and disease states, in particular, acute myeloid leukemia. The group is also investigating the impact of the functional specialization of RNA binding proteins on mRNA fate. Their multidisciplinary approach includes the use of CRISPR-Cas9 base editor screens, massively parallel tethering screens, molecular tagging, imaging, and in vitro experiments. The integrated combination of these methodologies will enable investigation of critical components of the mRNA degradation pathway and their contribution to mRNA fate with unprecedented throughput and resolution.

Harris Wang, PhD, and Samuel Sternberg, PhD, Systems Biology: $2,665,170 over four years from the National Institute of Biomedical Imaging and Bioengineering for “A high-performance and versatile technology for precision microbiome engineering.”

Adolfo Ferrando, MD, PhD, and Raul Rabadan, PhD, Institute for Cancer Genetics: $2,500,000 over five years from the National Institute on Aging for “The role of PHF6 in the control of hematopoietic stem cell aging.”

The center, established by the Herbert Irving Comprehensive Cancer Center (HICCC) in December 2021, is dedicated to the study and treatment of MDS, a malignant disease that attacks bone marrow stem cells. Each year, more than 40,000 individuals are diagnosed with MDS, and roughly one-third will develop acute myeloid leukemia (AML), a severe and rapidly progressing form of blood cancer.

To support their research, each team will receive a one-year $100,000 grant for the Edward P. Evans Center Pilot Awards and a two-year $60,000/year grant for the fellowships. The two pilot projects are being led by principal investigators Pawel Muranski, MD, assistant professor of medicine and of pathology and cell biology at Columbia University Vagelos College of Physicians and Surgeons (VP&S); Amer Assal, MD, assistant professor of medicine at VP&S; and Raul Rabadan, PhD, professor of systems biology and of biomedical informatics at VP&S. The two fellowships have been awarded to Rossella Labella, PhD, postdoctoral research scientist in the Department of Physiology and Cellular Biophysics(link is external and opens in a new window), and Junsong Zhou, PhD, associate research scientist in the Department of Rehabilitation and Regenerative Medicine.

Peter Sims, PhD, and Donna Farber, PhD, Systems Biology: $2,275,349 over three years from the Aging Biology Foundation for a subaward of “Single cell analysis of aging in lymphoid compartments.”

Study Shows Why Many Cancer Cells Need to Import Fat

Columbia and MIT researchers are revealing the surprising reasons why cancer cells are often forced to rely on fat imports, a finding that could lead to new ways to understand and slow down tumor growth.

Disruptors: Deciphering Cancer Is Messy and Complex. We’re Here for It.

Precision medicine has been a buzzword across the medical field for over a decade. But what does it really mean for cancer care and how is it influencing new therapies for patients? Initially, precision cancer medicine focused on targeting specific mutated genes. We thought that understanding the genetic mutations of a tumor would help us develop targeted drugs that would solve the problem, one broken gene at a time.

What we found instead is that when you build an inventory of all the broken parts in cancer, the number of mutational patterns that could give rise to cancer is larger than the number of atoms in the universe.

Michael Shen, PhD, Genetics & Development, will receive $1,950,515 over five years from the National Institute of General Medical Sciences for “Genetic Approaches to Development and Disease.”

Raul Rabadan, PhD, receives grants from the National Cancer Institute and Stand UP TO CANCER

Raul Rabadan, PhD, Systems Biology, will receive $6,804,000 over seven years from the National Cancer Institute for “Towards a quantitative understanding of tumor evolution” and $649,998 over two years from STAND UP TO CANCER for a subaward of “Multiomic Analysis of Immune System and Microbiota Influence on Temporal and Spatial Evolution of Tumor Microenvironments.”

Aleksandar Obradovic was selected as a recipient of the 2022 Dean’s Award for Excellence in Research.  This award is in recognition of the high quality and significance of your PhD thesis research in the Coordinated Doctoral Programs in Biomedical Sciences.

Michael Shen, PhD, the Arthur J. Antenucci Professor of Medical Sciences and  professor of genetics, urology, and systems biology at Columbia’s Vagelos College of Physicians and Surgeons, has been named a fellow of the American Association for the Advancement of Science (AAAS)(link is external and opens in a new window). Dr. Shen, who also co-leads the Tumor Biology and Microenvironment research program at the Herbert Irving Comprehensive Cancer Center (HICCC), joins four other Columbia faculty members who have been elected to the 2021 class of AAAS fellows.